My thoughts on work and life

Moving the digital frontier: Transforming a large enterprise to be customer centric from Chris Khalil

The CX team at ANZ is growing rapidly, it’s a great time to join something big.

If you’re interested, we’ve just launched a site that talks a little bit about the team and the roles we’ve got open which include:

If you’re interested in any of the roles you can reach out directly through the site.

Pleased to say I’ll be presenting at UX Australia this year on the journey we’ve undertaken in CX at ANZ these past couple of years.

Ad:tech 2014 – Advisory Board on Customer Experience

I was really pleased, and honoured, to be invited to be on the Advisory Board for Ad:Tech 2014 – it’s a really great conference and this year promises to be the best event yet.  I’ve been helping the guys think about why Customer Experience and Design matter, especially around the creative process and ensuring that ads work in harmony of the context they are in.   If you’re interested in digital sales and marketing make sure you head along.

Just got back from a fantastic week in Melbourne attending the agIdeas International Design Week conference.  I met with some fantastic new friends and was happy that my talk on UX and Design seemed to resonate with people.

There is a great review of the week here, and I’m pleased to say they put me down as one of the 6 best speakers.  I’d highly recommend anybody with a passion for design (of any kind) to attend next years event, it really is very special and you’ll come back inspired and enlightened. 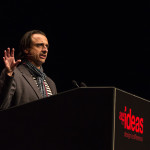 Was thrilled to get a call recently from a journalist who wanted to interview me about my thoughts on digital design and UX for a supplement in The Age newspaper – in preparation for agIdeas Melbourne International Design Week 2013. Click to expand.

I’m proud to have been invited to talk at agIdeas International Design Week in Melbourne late April – it’s one of the largest and most well respected design festivals in the world. Some of the greatest design talents from around the world will be in attendance from a diverse range of backgrounds from graphic design, product design, motion graphics, film and television, new media, animation, illustration, typography, architecture, fashion, sound design, performance art and advertising. Especially looking forward to hearing Vince Frost, David Nobay & Rafael Bonachela.

The Role of User Experience & Design in Business

I was recently interviewed by Iain Barker, Principal of Meld Studios on the role of User Experience and Design in big business.  For those that are interested here is the full post;

I’m pleased to announce that I’ve been invited again this year to be a judge on the online panel for the Interaction Design Association Student Challenge 2013.

This year the topic is ‘Playful Technology’ which is an exciting area so I’m looking forward to seeing what the students will come up with.

Mike Kuniavsky’s seminal book on design research ‘Observing the User Experience’ is being re-released as second edition.  I was privileged enough to be a reviewer for Mike and Elizabeth.  It’s a really great book, with around 75% of the content being  new.  Unlike most UX books it’s highly pragmatic and easy to consume.

I should mention, from an open disclosure perspective, that the work I did on digital ethnography is referenced in the chapter on Diary Studies.

I’ve was really pleased to be asked by Jeremy Yuille and Steve Portigal to be a judge on the ‘Interaction Design Associations 2012 Student Challenge’ on ‘Designing the Future of News’.

My views on Customer Experience Design

Late last year I was approached by Zafer Bilda (of Bienalto Consulting) to be interviewed for a white paper he was writing.  His aim was to approach several experts in the field in both the USA and Australia and uncover their views on best practice.

Zafer presented his findings as a presentation and white paper.  Well worth a read.

I was pleased to be asked by AIMIA to be involved in a forum on ‘Creature a Customer Centered Culture’ alongside:

It was a great event and I was interesting to hear other Peer’s view on this subject.

You can find a review of it on the Objective Digital Blog (containing the presentations).

Theme by Anders Noren — Up ↑